Errorgenie » How To » How to Get 1098-T Form From College and What Does it Mean? 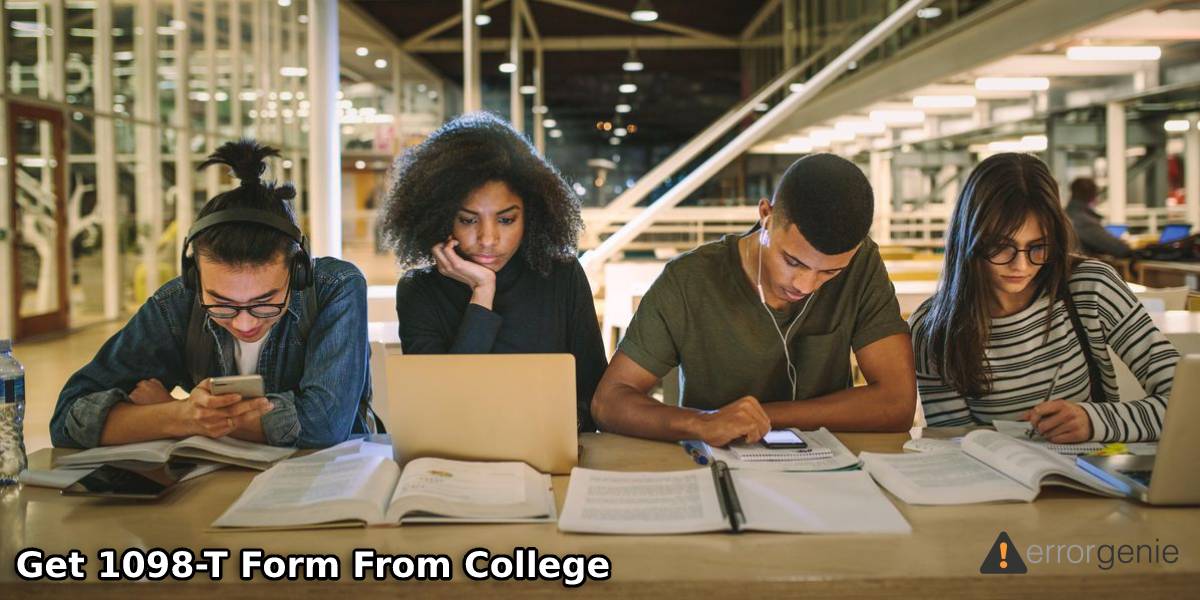 Colleges that are eligible and institutions which are post-secondary are required to send Form 1098-T form to a student who has submitted the expenses for qualified education in the previous tax year. These expenses will be inclusive of the enrollment fee, tuition, and essential course materials. Now, you may be having questions such as how do I get my 1098-T form from college and what information it carries. For knowing the details of the form and the procedure to get it, we have crafted this reading for you. Here, we will try to answer as many queries as possible with respect to the form and excellently guide you in knowing its purposes.

Today, we will be supplying our readers with information respect to the following:

Form 1098-T can be defined as information return. According to the IRS, businesses that are involved in creating reportable transactions are supposed to file this return. They are also required to give a copy to another party which is a part of the transaction. As per Form 1098-T, the amount of expenses and qualified tuition paid by you in a particular tax year is reported by your college.

The form is used by the Internal Revenue Service for the purpose of matching the data from credits, deductions, and the information returns to the income. In case Form 1098-T doesn’t exist in the system of the IRS and the education credit is claimed by a taxpayer on a federal income tax return, he/she will be asked by the IRS to know whether or not he/she is eligible for receiving the credit.

It should be noted that this Form can also be filed by insurers in case they have refunded or reimbursed the qualified tuition fees as well as the expenses relating to the same.

The 1098-T Form can be issued by educational institutions which can take part in the programs for student aid organized by the Department of Education. This is also inclusive of vocational schools, universities, colleges, as well as institutions providing post-secondary education.

Institutions that issue Form 1098-T are needed to give its copy to a student by January 31 of that year which is following the tax year during which the payment for the taxes was made. This means that the form for the tuition which was paid in the year 2020 will be with the student by January 31, 2021.

Certain information returns come with thresholds with minimum-filing. However, the 1098-T Form does not come with such a threshold. This form is to be issued by schools in case the expenses for qualified education have been paid. These expenses will be inclusive of the fees, tuition, course materials needed for enrollment purposes which will be inclusive of certain exceptions.

In certain instances, your institution may not be required to send this form. These will be inclusive of the following:

Please Note: You can connect with your institution or school in case you believe that you were entitled to the 1098-T Form but did not receive it. In addition, you can also verify the email address that is present in the school’s file.

The 1098-T Form is short and comprises at least 10 boxes. These boxes are numbered. You may also find basic information for identifying on the form.

The contents of each box have been displayed as follows:

Filer Information: Towards the left, the school that has issued the form will mention its name, tax identification number, telephone number as well as the address. A box for the number of the student’s account will also be present.

Student Information: You can find the boxes for the name, tax identification number, and address of the student on the left.

Box 1: The complete amount of those payments which have been received by the school, in a calendar year, from you for the tuition and other such expenses will be stated here. The reimbursements/refunds will not be included in it.

Boxes 2 and 3: Expenses could be reported by schools, till the year 2017, by following one of the two ways mentioned below:
Depending on the amount paid by a student in a year
Based on the amount billed by the school

Beginning from the year 2018, Box 1 was used by the schools for the purpose of reporting payments. At present, Box 2 is not used. The form’s 2020 version is not supportive of both the boxes. However, these boxes have been placed on the form for use in future.

Box 4: This box is filled in by schools in case the need for reporting any changes made for a former year arises. The year should be after 2002.

Boxes 5 and 6: In Box 5, grants/scholarships can be found which have been processed by the school and applied to the student’s tuition in a tax year. In Box 6, the changes made to the grants/scholarships that were reported during a formed year. The year should be after 2002.

Box 7: This is checked by the school in case a part of your tuition submitted during the tax year was applied to a certain academic period which began in the following year’s first quarter.

Box 8: In case in an academic period beginning in a calendar year, you have been enrolled for half-time, this box will be verified by the school.

Box 9: This box is helpful for knowing whether a particular student was a graduate.

Box 10: Insurers utilize this box for the purpose of refunds or reimbursements of qualified tuition as well as the expense relating to the same.

Form 1098-T will be needed at the time of filing the federal income tax return. The form will be needed only when it has been received by you. For the purpose of calculating education credits like lifetime learning and American opportunity tax credits, the form will be useful. Additionally, it can be utilized to claim credits on the tax return of the student or parent.

The 1098-T form is important and few people would clearly know about it. The form being important for many purposes, we prepared this reading to educate all our readers about it. The form indicates information return and can be received by your college or an educational institution. The form carries the information of the filer and student. In addition, it can also mention the information relating to the academic period of the student, details of the refunds or reimbursements, etc. After reading this post, you will be aware of when the form has to be submitted and for what purposes you can use it. If you want to know how to file an amended tax return follow the guide now.

In this reading, we tried to answer as many queries as possible for giving you clarity about the 1098-T form. Should you like to attain additional information about it, you can read the 3 FAQS listed as follows:

Ans. The 1098-T form need not be reported on the tax return until the education credit has to be claimed. In case the scholarship or grant amount, which is indicated by “Box 5” of the form, is higher than tuition, which is indicated by “Box 1 or 2”, you can report the form as the additional scholarship money will be considered as income that is taxable on the return.

Ans. Form 1098-T can be used for increasing the refund. Based on the tax obligations as well as any other deductions/credits, you may be eligible for the refund. Then you will receive money back in place of owing any amount of money to the Internal Revenue Service.

Ans. In case the student is being claimed as a dependent by the parent on the income tax return, Form 1098-T will have to be added by the parent.